7 Quick Takes Friday
--- 1 ---
I really couldn't help myself. I've enjoyed gardening so much in the past four years that I decided to go for it, despite moving sometime in June or July. Lettuce, kale and beets went in earlier this week and I hope to see some fruit to my labor before we hand over the keys. Maybe the new owners will appreciate it? Or, maybe it just solidifies the fact that sometimes I'm very bad at prioritizing. :)

--- 2 ---
We moved forward and sold/donated a lot of items in the past few months. We're downsizing in a major way and I finally admitted that maybe I should move on from owning a kitchen item that has only one use. So, I parted with my whirley-pop. I will say this: I've made my first batch of popcorn in a pot and we did just fine. And, I will not miss cleaning oil off of all the nooks and crannies of that popcorn maker.

--- 3 ---
Another thing I'm constantly doing is organizing my spice drawer. We use a lot of spices when we cook, especially since I often make my own "fajita spice packet" type mixes from scratch. This week I discovered, despite my best organizing efforts, that I had three (nearly full) containers of chipotle powder. Yes, this is in addition to actual chipotle peppers in adobo sauce sitting in my fridge, too. Feel free to comment with your favorite recipes... because we've got some chipotle in our future!
--- 4 ---
George is a sports nut. Seriously, anything with a ball is his jam. And he's not very picky, either! He likes golf, football, soccer, basketball, etc, etc, etc. He runs around the basement, falling to catch a ball, yelling, "I DOVED!" His Marmie is a Cubbies fan to the max, and yesterday I heard him seamlessly call "Baseball", "Baseball Cubbies", as if the sport necessitated both nouns. Feel free to enjoy watching him, as he figures out all the ins and outs of the game:

--- 5 ---
Another thing George is figuring out is earbuds. I found him putting these in his ears yesterday and saying, "No music?!" with his hands in the air in that "huh?" type gesture. 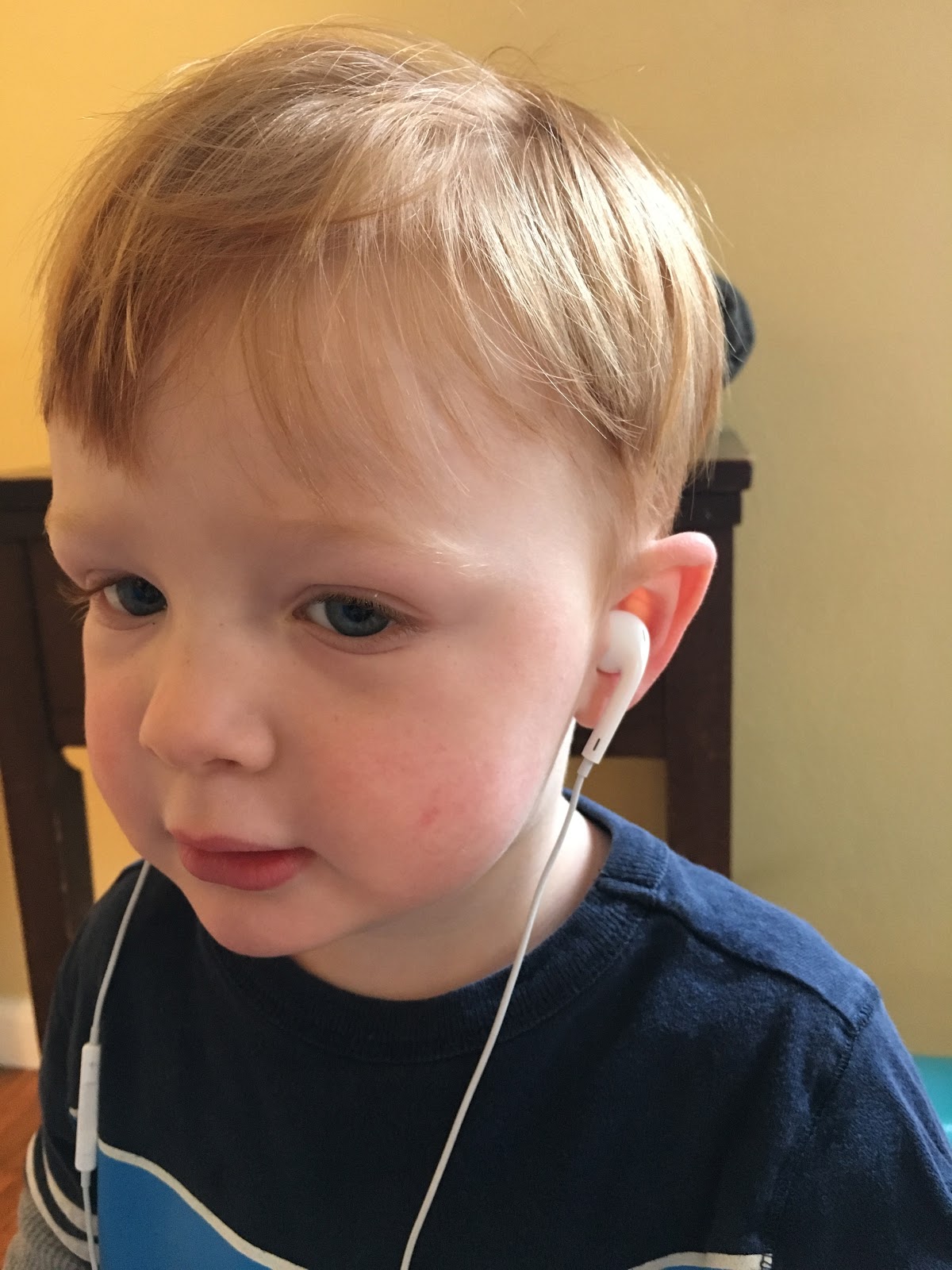 --- 6 ---
I went for a Couch to 5k run last night. I haven't gone for a run since before I was pregnant with Rowan... So, that's probably a year and a half? A long time. I had a few thoughts: 1. I still hate running with glasses and I still no longer have contacts. I run blind and pray I won't see anyone I know. 2. I saw two darting bunnies in the almost pitch dark last night. They outpace me by at least double my speed. I was proud of myself for not jumping/screaming in terror--you know, the whole blind/no glasses thing. 3. My Pandora station (created from the song Sugar from Maroon5) seriously failed me when in mid-stride it attempted to play "With Arms Wide Open" by Creed. Hello very fast thumbs down. Cardio, yo. Not sobbing in my pre-teen years.
--- 7 ---
Everytime I type "VM" for voicemail into my iPhone, it corrects it to BM... Sometimes in that sneaky just-as-you-press-send way instead of while-you're-proofreading way. Stop it, Siri, just stop it. You (and I) are way too old for potty humor.

Happy Friday!
Posted by Mrs. Mary Virginia at 6:33 AM