7 Quick Takes Friday
--- 1 ---
What's Easter without baking fabulous treats?
I had the sudden, terrifying realization this week that I'll be in California (I know, quit yer belly-achin', right?). But, that means I will be far from my marble rolling pin.
I need to decide how to celebrate Easter without my kitchen...
Because it won't fit in our luggage.
But I will definitely miss my homemade cinnamon rolls...
--- 2 ---
This is the project I undertook for our anniversary. The final product seems so simple, but it didn't feel simple as I searched for dates of our significant life events both individually and as a couple. It was certainly fun, though!
A special shout out to this gal who provided me with a digital file to print up all the dates.
(Because individually stamping 365 cards was not my cup of tea, though I did consider it.) 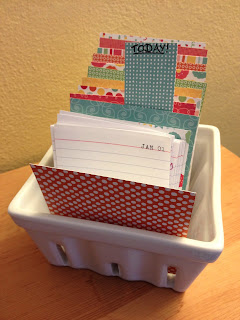 --- 3 ---
While Brian works on our beautiful, new bathroom... I've kept myself busy with other tasks.
You see, our house definitely had cats in it at some point...
I know because the basement door has a cat door in it.
And another proof of their existence has been bugging me for quite some time: 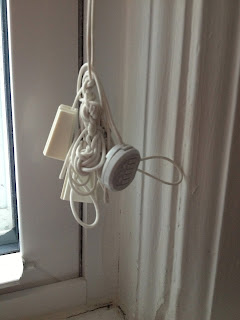 And as of this week, I'm the winner and those knots are gone... (Nevermind the fact that I probably could've cut the knotted ends off based on the fact that I ended up trimming them to be a nice, uniform length. At least I enjoyed un-knotting them.
It's tough having OCD tendencies. Promise.)
--- 4 ---
I remember Grandpa George turning his nose up at canned soup. Grandma Ginger made him homemade soup and the condensed stuff wasn't worth his time of day. When I saw Aunt Leila's post on homemade soup, I decided to add it to my list of meals.
I must say, I was pleased! 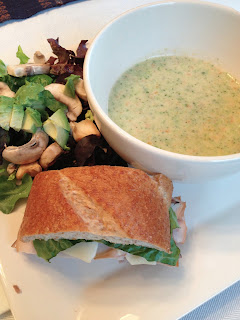 It was yummy and if it had chunks of chicken in it, it would've made a very hearty winter meal... It's in my bamboo box, now!
--- 5 ---
I've recently subscribed to designmom.com and simply love the videos she produces.
No really, watch this video. It will delight you. :)
--- 6 ---
It's been 10 years since I graduated from high school as of this June.
Isn't that crazy? Ok, maybe not really. That was a long time ago.
I'm trying to convince the other 7 graduates of 2003 from Trinity School at Meadow View to make the trek out to South Bend for a reunion. Don't you think that would be lovely? Me too.

Ok, well, we could take a trip (in one van--hah) to Chicago, which would be more fun.
--- 7 ---
Thanks to Edmundo for linking to this article. Totally hilarious.
And, pretty par for the course on what I remember about college.
Heck, I'd take a jar of nutella right now, too. :)

Click here to find out why Jen doesn't like live music...
Though all I can actually comprehend about this quick take is that she saw
Patty Griffin in concert.
I'm WAY jealous.
Posted by Mrs. Mary Virginia at 7:00 AM