Thanksgivings of days gone by...

I thought I'd give you a brief (internet-documented) Thanksgiving history.
(Apparently, I don't photograph Thanksgiving much.)

But, I thought I'd start off with a photo of Christina and me from somewhere around 1996.
Aren't we cute? :)
(I love that I'm missing teeth. And obviously drooling over what is probably Grandma Mary's world famous cheesecake!) 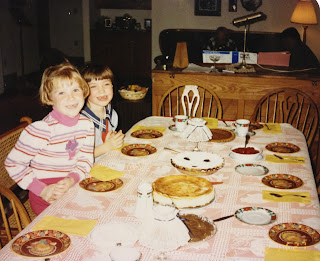 I hope that all y'all have absolutely fabulous Thanksgivings!
Praise God for the many blessings he has given us.
This year has been quite the showering of blessings and I'm so happy to see both of my families over this coming weekend and will of course miss seeing much of my extended family. May we not take for granted all that the Lord has given us!
*     *     *
In 2005, I became Sean Didymus' godmother! 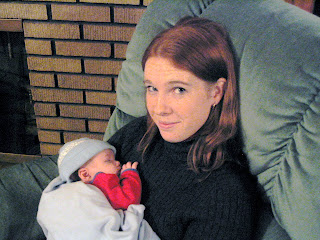 In 2006, I was a senior at George Mason University and we celebrated in King's Park.

In 2007, I celebrated as a missionary on the South Side of Indy. (In pictures, In words.)

In 2009, we had a Work College Thanksgiving. Gloria was just a baby.
(And we plugged in with my now family's Turkey Bowl.)

In 2010, Laura F. now S. and I went to Aunt Laurie and Uncle Glenn's!
(Peter didn't make the turkey. Aunt Laurie did. We had the Wii competition of a lifetime.)

In 2011, Brian and I were engaged and spent the weekend here.
Wii competitions appeared again, we bought my wedding ring on black Friday and
we had a tamale makin' party! It was fabulous.


For 2012, we do it all. Thanksgiving in South Bend, a day in Michigan and
Grandma Ginny will come to see our home... Hurray!
Posted by Mrs. Mary Virginia at 7:05 AM

Email ThisBlogThis!Share to TwitterShare to FacebookShare to Pinterest
Labels: Family