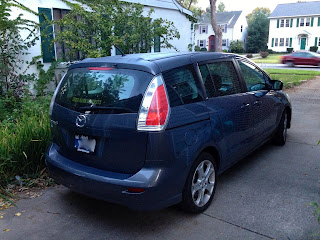 Doesn't it look like a mouse? I might've suggested that it looks like a mouse (grey, rounded to the nose, antennae in the middle of the back...) and I might've suggested names like Mickey and Minnie. It might've been immediately shot down... Do you have any suggestions? I mean, how long can a car go unnamed without throwing some sort of rebellion... ? (And if you suggest mouse-y names, I doubt you'll be able to convince my husband... I already tried.)

--- 2 ---
Speaking of the car... it has 6 seats and is being a good servant with soccer season. While it's pretty much a sweet car, it's also a simple car without a lot of bells and whistles... which means every person who sits in the back and uses the sliding doors behaves like the door will shut by itself when triggered... like most new vans... (ours is a 2010, so it ain't no oldie)... well, those doors don't move without good-old-fashioned umph.
--- 3 ---
Want to make the best pizza that ever came from my kitchen? Short of coming over for dinner, feel free to try this recipe... I used my new kitchen aid (yay!) and made the best pizza I've ever made. I've discovered that preheating the stone probably matters a bit more than I'm willing to admit... next time, I'll make sure to do that.
--- 4 ---
I ran twice this week... A weak week 2 and then a less weak week 2. As I was running a less weak week 2, I had the time to think of something other than the torture that my running walking/running causes. I was contemplating what a joy it is to live two-and-a-half blocks from work, to share my workplace with my husband and to in general simply love my neighborhood. As I was thinking all of this, I waved to a student who was driving home, saw a faculty member walking to his home, chatted with Gretchen, Gloria, Johnny and Leo and then chatted with Brian's Grammy who lives about 4 blocks from us and was out for a walk. 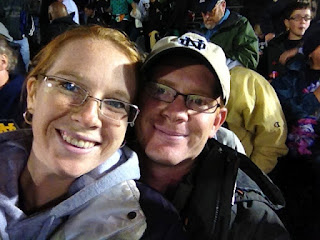 This interview of Louis Nix III, a ND football player, is fabulous. I'd like to say that it's viral video material, but I'm going to promote it here, so I think that's considered fulfilling your own prophesy... or something. (Thanks to my father-in-law, Brian, for sending this along!)


--- 6 ---
Veggie Chips. I can't get them to last a week until the next grocery store trip. I can't even get a sandwich baggie of them to last until afternoon snack. I think there's something wrong with them.
--- 7 ---
Sunday afternoon, Basil to pesto... We gave all the basil leaves off of one plant to our friends who had other things to do than garden this summer and here are all the leaves off of the remaining plant... 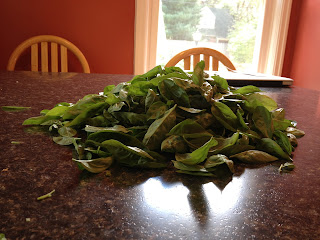 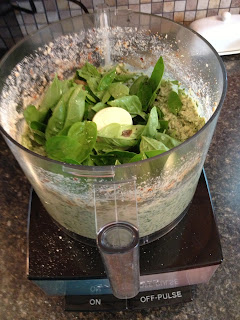 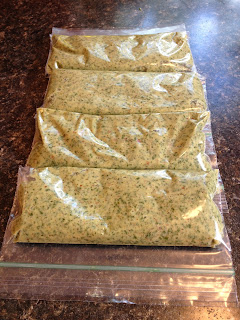 What a treat! But don't worry- we keep ourselves grounded with Aldi brand Parmesan and almonds instead of pine nuts. :)

To find out what Jim Gaffigan says about camping (and want to laugh), see Jen!
Posted by Mrs. Mary Virginia at 7:53 AM