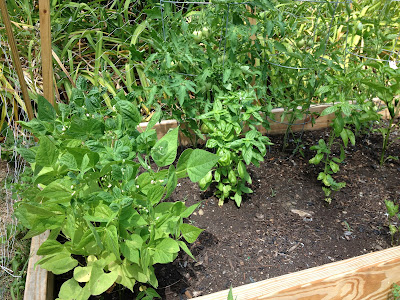 Despite the absolute lack of rain in Indiana, my garden is coming along! (I keep telling the Lord he can pick up the watering bill any day now... for as long as He likes.)

Katie visited yesterday and identified our beans on the left as "bush beans", which she says are the best. (I'll take it!) My basil looks not as bushy as last year, but I've already indulged in tomato, basil and mozzarella under the broiler.

The peppers and the cilantro, which you can't see in this picture, went into a batch of homemade salsa, which I admit has too much garlic in it, which is too bad because Brian and I aren't huge fans of garlic. The cilantro looks like a leaning tower of cardemom possibilities, so Katie approved my entirely pulling it out of the ground and throwing it away... which might actually provide more growth for the poor plants behind it... (Note to self for next year!)

I never got around to cilantro pesto this year... maybe next year!

Eagerly awaiting fresh tomatoes and curiously awaiting my first carrots from a garden... ever. I fully expect them to be knotty, weird looking and less-than-enough for a salad for two. :)

Happy Tuesday, y'all!
Posted by Mrs. Mary Virginia at 7:18 AM